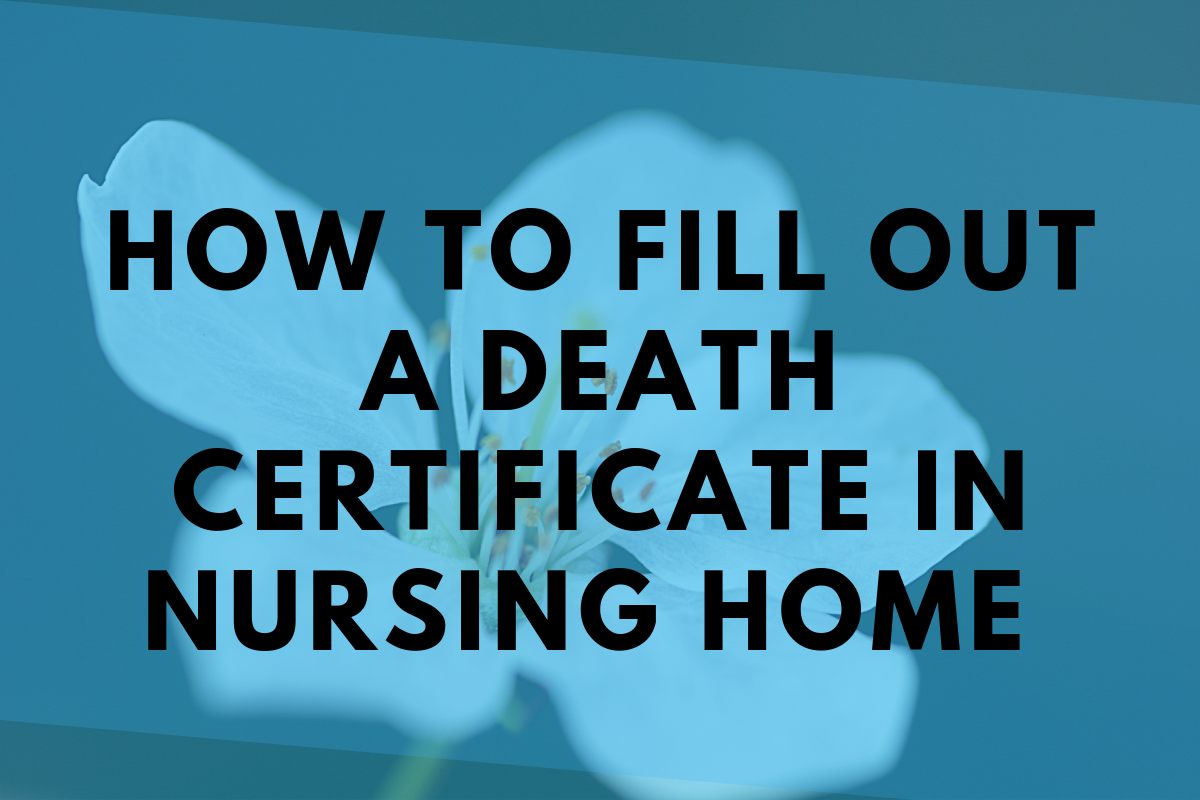 When I first started working at a nursing home in Connecticut, it didn’t take long before I had to pronounce my first patient. It was a little lady who died peacefully and didn’t have many complications.

The problem was I hadn’t been taught how to pronounce a patient in the nursing home setting. I had worked in the emergency room and was used to having a doctor around or medical resident pronounce the patient.

Later in the day, the supervisor handed me the death certificate to fill out. I had never seen the form before and didn’t know which diagnosis codes to use. The supervisor had never filled out the form and couldn’t assist me.

Do I pick the chronic illnesses that were documented by previous providers? Or the recent upper respiratory disease that she had and was “improving from” per nursing staff?

When you look at a death certificate, you will see that it includes lots of personal information on the patient. It will consist of the name of the patient, date of birth, address and more. All these questions will need to be completed either by the supervisor in the facility or the practitioner filling out the certificate.

The doctor, APRN, or physician assistant will need to fill out the cause of death along with intermediate causes, presumed onset and the date of death, and underlying causes.

There will be ancillary questions dealing with tobacco and pregnancy that will need to be answered.

You will need to write in your full name with signature and credentials. Include the date, address of pronouncing provider, and make sure the name is written on the document.

The rest is usually filled out by the medical examiner or staff member.

Do not do the following when filling out the certificate

According to the CDC, Part I is for reporting a chain of events leading directly to death, with the immediate cause of death (the final disease, injury, or complication directly causing death). Only one cause should be written on each line. Line (a) must always have an entry.

The “intermediate causes” contribute to death such as congestive heart failure or myocardial infarction.

When possible, include the underlying causes, which may have contributed to the end, such as obesity or coronary artery disease.

Part II includes other illnesses the patient had even if not a direct cause of their death. The other contributing diseases will help with statistical collections.

Remember that the Center for Disease Control (CDC) wants the “best estimate of the interval between the presumed onset and the date of death” for each diagnosis listed. The terms “unknown” or “approximately” may be used as well as terms such as minutes, hours, or days. Just do not leave the time estimates blank.

When listing end-organ failure, make sure to include the etiology on the line(s) beneath it. For instance, if the patient had kidney failure, was it due to Diabetes?

Include the following with neoplasms

CDC wants to know as much as possible when reporting a neoplasm as the cause of death.

In most states, the death certificate will list the time of death, cause of death, and place of death.

·       If female, was she pregnant at the time of the death? If the female is either too old or too young to be pregnant, check the “Not pregnant within the past year” box.

·       Take care to make the entry legible and use permanent black ink.

Always check the Manner of Death

The manner of death (Natural, Homicide, Accident, Pending investigation, Suicide, could not be determined)

3) Statistical studies of injuries and death.

There are special considerations when it comes to the elderly. According to Henry Hanzlick MD:

Do not use these adjectives on the  death certificate

If you are unable to figure out the cause of the disease process, you must document with words such as “unknown, undetermined, probable, presumed, or unspecified.” You need to let people know that you didn’t just ignore the cause.

When to report a death to the medical examiner

The medical examiner investigates deaths that are unexpected, unexplained, or if an injury or poisoning was involved.

Causes of death that should be reported:

Abuse or neglect: All suspected cases of abuse should be reported unless ruled out.

Inconspicuous injury: When the patient has an unwitnessed fall, traumatic fractures, and other types of injuries you should report the death.

Suicide: When the non-suicidal cause of death cannot be determined, the possibility of suicide should always be considered and reported.

Hypothermia and hyperthermia: These types of death should be reported because external conditions such as injury or poisoning may be involved. If you believe it to be related to an illness, then document this as an intermediate cause of death and list the underlying cause.

If the patient was possibly poisoned or had an injury resulting in death, you will need to either have a supervisor or yourself call the medical examiner/coroner to report the death. The examiner will then determine if there is a need for a possible autopsy.

If you are in doubt as to whether the death is reportable, report it.

Failure to complete the death certificate can be a criminal offense

The original death certificate is given to the funeral home or mortuary. The failure of a physician to immediately submit the required form to the government (to trigger the issuance of the death certificate) is often both a crime and cause for loss of one’s license to practice.

Distractors from the real cause of death

When trying to determine the actual cause of death, the complication can sometimes be confused to be the cause. Such as pneumonia, which is reported as an ”intermediate cause” of death while the primary diagnosis, such as cerebrovascular disease or chronic lung disease is the actual cause.

Always try to identify the underlying cause of death and its related complications, which made the problem worse such as sepsis related to neurogenic bladder associated with the main cause of ALS.

Some examples by the college of American pathologist include:

So always try to identify the root cause of death then add the complications that lead up the death of the patient.

The funeral home directors are usually helpful in assisting the medical providers in completing the death certificate. Often, they will type in all the information regarding the patient, leaving you with your portion to complete and sign.

The funeral director often picks up the certificate at the nursing home or even in the doctor’s private practice. When they come to the office, they will often have the “face sheet and diagnosis list” given to them by the facility to assist in making the decision.

Please be polite and try to be timely if filling out the certificate. The director needs your signature to complete work. The funeral director is part of the team and should be treated as such.

If there are not any know causes of death, part I may be reported as “Undetermined Natural Causes” while any co-conditions are reported in part II.

Also, do not overlook dementia as the underlying cause of death. This disease process has multiple manifestations leading to death.

You want to take filling out the death certificate seriously. This form is used for many official functions and can affect the outcome of court cases and family insurance settlements, etc.

The cause-of-death statistics continue to be one of the most valuable databases for monitoring health at the local, state, and national levels, and for epidemiological and medical research.

Hanzlick R. Cause of Death Statements and Certification of Natural and Unnatural Deaths. Protocol and Options. American College of Pathologists. (1997) https://name.memberclicks.net/assets/docs/8c58e7e9-b2fa-44a9-8d1b-3085cd14bf25.pdf Retrieved October 1, 2019

I am a Family Nurse Practitioner working in the post acute setting which includes Nursing homes, Assisted living facilities. I have worked for two other companies that provided APRNs to the nursing homes and now run a company providing APRNs in this setting. I have experience with clinical, operations, and general nursing home topics. This blog is a hobby that I use to relax after a long day working in the post acute world.

link to The Ivy at Watertown Connecticut

Life at a nursing home for a senior is the hardest to cope with due to health changes and low resistance levels to new environments. What is even worse is living in a nursing home with a prior...

As an Amazon Associate, I earn from qualifying purchases.

I'm Steve, Advanced Practice Registered Nurse Practitioner. I recently started this website with the help of my wife who is a registered nurse in hopes that we can advance the knowledge of the post-acute care community.

I have worked in multiple nursing homes, assisted living facilities, and evaluated patients in their homes. I started as an APRN working for a SNFist group that was acquired by a major national corporation. Eventually, I was promoted to manager but felt the need to move on to greener pastures.

I started my own post-acute APRN group with my best friend and partner who is an internal medicine doctor. Since then I have been in a constant state of learning in regards to business development, ACO, nursing homes, assisted living, bundle payments, accounting, scaling, and more.

This site is a participant in the Amazon Services LLC Associates Program, an affiliate advertising program designed to provide a means for sites to earn advertising fees by advertising and linking to Amazon.com. We are compensated for referring traffic and business to Amazon and other companies linked to on this site. We also participate in other affiliate programs which may compensate us if you click thru and make a purchase.

You can find out more about which cookies we are using or switch them off in settings.

This website uses cookies so that we can provide you with the best user experience possible. Cookie information is stored in your browser and performs functions such as recognising you when you return to our website and helping our team to understand which sections of the website you find most interesting and useful.

Strictly Necessary Cookie should be enabled at all times so that we can save your preferences for cookie settings.

If you disable this cookie, we will not be able to save your preferences. This means that every time you visit this website you will need to enable or disable cookies again.